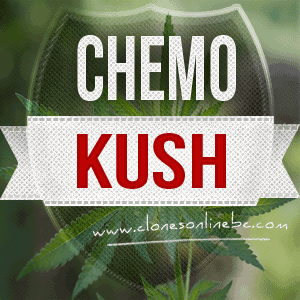 Chemo Kush sounds kind of aggressive at first (and no, that is not a cancer joke in any way, shape or form. There are plenty of people out there that suffer from said ailment and that’s nothing to laugh about) but it’s actually one of the more efficient strains you’ll come across. When we say efficient that means that it’s not only been around for quite some time, but that also means that the high and everything is pretty set in place. The Chemo strain is said to have been developed in the 1970’s within the region of Canada, it’s a heavy indica and was initially developed to help people deal with the side effects of chemo (chemotherapy). Chemotherapy is the treatment that people need to make use of when they are told they have cancer (well, it’s one of the treatment options at least) and is also known as UBC Chemo. It’s supposed to be referencing the University of British Columbia, which is apparently when the strain was initially developed. The genetics of this strain are kind of fuzzy, but the genetics are always going to be carried on throughout time through Jordan of the Islands. The aroma of this plant is very woody and has an earthy smell to it, but the potent aspect of it all is quite high as well.

It’s perfect for those who are having problems with pain or even sleeplessness, as well as much more common ailments like appetite loss and nausea. These may seem like simple problems at first, but if you’ve ever had to deal with problems like these for yourself than you’re already going to understand the importance of it all.

Seeing as it’s a very earthy strain you probably wouldn’t think that the smell is going to tingle your senses. Usually when a strain is earthy it smells like woody-regions or even a tree in itself, but this is actually one of the most skunky/potent strains you’ll ever come across. It makes people feel euphoric which is ideal for anybody suffering from mental ailments like depression or anything like that, and there have even been reports of this particular strain helping people cope with their MS (Multiple Sclerosis). If marijuana has the ability to soothe the incredibly serious ailments people are sporting every single day than why would is still be illegal in various places? It’s about time the world saw medical marijuana for what it really is!

Remember that clones are going to make or break your harvest, if you’re making use of low-quality clones from a provider that really doesn’t care it’s going to show in the end of it all. High quality clones will ensure that your harvest is not only successful, but also that you get the most out of your plants. It’s one thing to just love smoking marijuana, but it’s another thing to actually believe in the medical aspects of the plant and all of the strains being offered.

If you’re stressed out and need to relax this is the right strain as well, and there really aren’t any negative aspects to it. It might not smell as fruity as you would like if you’re the kind of person whom is incredibly into that, but it’s still the perfect strain for just about any medical marijuana patient. In any case Chemo Kush is one of the best strains around right now, and the only way to get your hands on the right plant of this type is to work with us (trust us, you don’t want crappy clones in your grow set-up).